The Game This Weekend Is Pay Per View Only - We will not be watching the game at Gator's This Weekend.

NORMAN — Oklahoma and Army West Point will meet for just fourth time in the history of the two football programs Saturday at 6 p.m. at Gaylord Family — Oklahoma Memorial Stadium, and for the first time since 1961. To celebrate the occasion, the OU Athletics Department has announced several special activities surrounding the game.

Following is a list of special events planned for Saturday, some of them weather permitting: 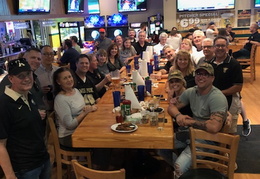 DURHAM, N.C. -- Daniel Jones was a more efficient passer than Army's quarterback -- and that's more impressive than it might seem.

Jones threw for one touchdown and rushed for another score, helping Duke open with a 34-14 victory over Army on Friday night.

"It started with a strong running game. ... The offensive line and their ability to impose their will and open up lanes for the running backs was big," Jones said. "Only 17 pass attempts but when we did, we were efficient with it, and it was good to see."

The biggest surprise of the night was how well his counterpart -- Kelvin Hopkins Jr., a junior making his first career start -- threw the ball. The passing game has largely been an afterthought at Army, which for years has been known for a triple-option offense that led the nation in rushing last year.

Details
Written by Todd A. Browne '85

As previously announced, nomination packets for the 2018 WPAOG Election must be received at Herbert Alumni Center by July 1, 2018. The requirements for a nomination packet are posted on the WPAOG website (please see the link below).

Talented and dedicated volunteer leadership is critical to WPAOG’s success in serving West Point and the Long Gray Line. WPAOG Directors are fiduciaries, and they are responsible for the oversight and the guidance of our Association’s services, programs, and operations (see Bylaws, Sec. 6.1). The Advisory Council advises the Board of Directors on matters pertaining to the Association’s affairs (see Bylaws, Sec. 7.1). Advisors also serve on WPAOG committees and task forces.

The 2018 Nominating Committee shall consider submitted nomination packets and compose a slate for recommendation to the Membership at the Annual Election. The slate shall include five nominees for five Director positions (each with a three-year term), and six nominees for six Advisor-at-Large positions (each with a three-year term). All terms shall begin on January 1, 2019. The 2018 Election will take place at our Annual Meeting, Tuesday, November 20, 2018, at 5:00pm Eastern Time, in Herbert Alumni Center at West Point. All USMA graduates may vote at the Annual Meeting, or vote by proxy, which will be distributed in October.

Mark House, the Chair of The Thayer Award Nominating Committee sent out a note inviting all members to provide names of potential Thayer Award candidates together with a brief description of the individual’s qualifications. Your inputs should be received by June 15th. Mark also wanted you to be aware of the award guidelines adopted by the AOG Board of Directors (listed below).

The reason the nominating committee is asking now for just names and short descriptions, rather than requesting formal submissions, "is to take advantage of the collective wisdom and experience of members of the Long Grey Line who interact daily with hundreds, if not thousands, of great Americans deserving consideration for this very important and coveted award."

Mark has sent this message to all Society Presidents in order to get the message out.  Mark has provided a link below to view past Thayer Award recipients along  with biographies, photos, videos and speeches presented to the Corps of Cadets. Mark guarantees "you’ll have goose bumps!" after reviewing the list of names, photos and speeches.

The Thayer Award Guidelines are listed below: 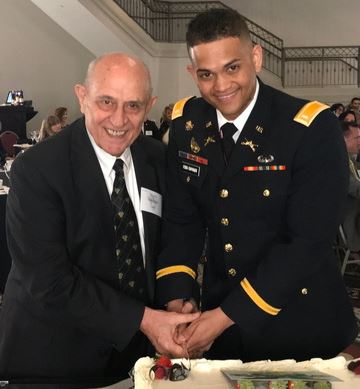 Our oldest graduate in attendance this year was Jack Halsey, LtCol, USAF Retired, Class of ’58 and our youngest graduate present was 1LT Karlos Febus, Class of 2014.

Mike Genettie ('75) acted as our master of ceremonies and had the following background on both our graduates being honored that night.

"For those who have attended previous Founders Day dinners here, you know this next statement to be true--Jack was at odds with the Tactical Department from the moment he arrived at West Point. But, Jack’s “Glory to God” was good enough to get him into the Cadet Chapel Choir, which allowed him to escape some of Plebe Year into music, and into New York City. He met the love of his life in 1956 on a blind date. Even though she introduced herself as Arlene, Jack had misunderstood and later tried to introduce her as Marlene. But it all ended well as they married in the Catholic Chapel on Graduation Day.